As I write this, my wife is sewing a skirt. Everything is laid out: the skirt itself, the fabric she cut the material from, the thread, the scissors, a measuring tape, some pins, the sewing machine and the pattern. It’s the first piece of clothing she’s made from scratch, and she’s thoroughly enjoying the process. I find the chatter of the sewing machine very comforting.

I’m a fan of analogue tools. I depend on them. I incorporate them into my creative process no matter what I’m doing. When I’m thinking about the architecture of a piece of software, I use a whiteboard (and index cards attached to the board with magnets) long before I launch Xcode. When I’m designing a user interface, Photoshop isn’t touched until I’ve filled several pages of a paper notebook, and I have multiple uncapped pens rolling around on the desk.

And then there’s writing, of course. I mostly do that on an assortment of electronic devices - some new, like my 2013 MacBook Air, and some old, like my gorgeous PowerBook 150 from 1994 - but right now I’m using something a bit more vintage: a typewriter.

All these tools are the same to me. I care about their functionality most of all, naturally, but the aesthetics are admittedly also a factor. My notepads are Moleskines (squared paper; pocket sized to carry in my coat, and large softcovers to use at my desk), my pens are Staedtler pigment liner Fineliners (I prefer the 0.3mm tips), and I get my index cards from a little shop here in Edinburgh. The typewriter is a late model Olympia Traveller de Luxe S, with the impossibly modern conveniences of 0 and 1 keys (negating the need to use uppercase ‘O’ or lowercase ‘L’, respectively), shift lock, and even a tabulator function.

There’s a ritualistic quality to these objects, but that’s not why I love them. I use them to slow myself down. To introduce just enough friction that I’m compelled to pause. We don’t pause enough anymore. We don’t give ourselves time to think.

Instead, we try to parallelise the creative process, by thinking and doing at the same time. We think a little, then we start writing – or drawing, or we make a new software project - and then we think a little more, and so on. Our focus ends up being fragmented, and our greatest friend is the Undo command. It didn’t used to be that way.

When I’m scribbling in a notebook, I feel quite a bit of guilt. My sketches are awful. My thoughts aren’t worthy of this beautiful piece of stationery. My used notebooks will never be compared favourably with Da Vinci’s, nor perhaps even with yours. So I slow down. I think for a few moments longer, in the hope of avoiding a crossed-out word and a marred page.

On the typewriter, it’s even worse - or better, depending on how you think about it. Strike a key too gently, and the letter will be faint or invisible. Strike the wrong key, and you’ll have to remove the paper, paint over the error with correction fluid, let it dry, reinsert the paper and roll it to the correct line, position the carriage, and try again. It’s onerous, and even when you get it right, it’s physically difficult. The brakes are always applied.

Analog tools are rich and expressive, but they’re also a leash, or a set of reins. They lock you into low gear, and they carry a penalty for sloppiness. It’s impossible to work in the same way that we do on computers and similar devices. The entire rhythm and structure of the approach is different.

There’s an old saying regarding craftsmanship: measure twice and cut once. It’s a truism, and obvious, and universally acknowledged to be good advice. Like most good advice, we rarely act upon it. Our deadlines and impatience don’t allow us to, so instead we charge ahead. We make errors as always, but the main thing we lose is the time taken for forethought. We can’t prevent mistakes, but we can try to address false starts, and block, and creative cul-de-sacs.

These older, simpler tools, with all of their baggage and inefficiencies, compel us to front-load the thinking process. They necessitate a certain concentration and cognitive abstraction. They force us to measure twice. Error-correction becomes a vaguely burdensome eventuality, as it should be, rather than an omnipresent part of the creative process. The slower pace of authorship throttles the hands, allowing the mind some extra breathing room and thus more effective oversight.

Analog tools don’t believe in public betas. Instead, they believe in setting out your materials - your scissors, and thread, and measuring tape, and fabric - then planning. When it comes time to begin assembly, the process is more regimented and deliberate, and less like trial and error. Writing on a typewriter isn’t just slower and noisier and more tiring on the wrists; it’s also more akin to driving a car than just emitting readily-editable thoughts and seeing what sticks. It’s a performance, not a composition. 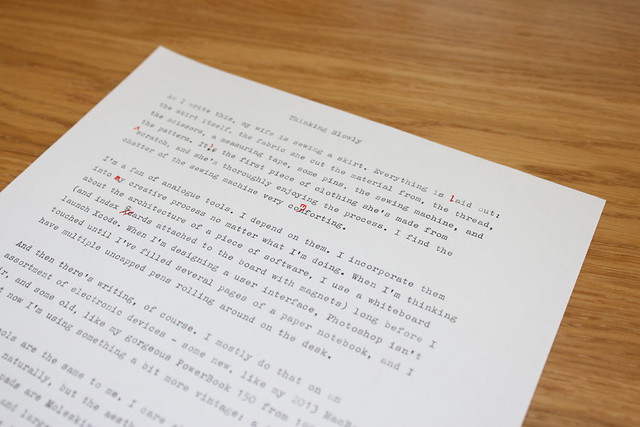 We’ve all found ourselves stuck on a problem, staring at the screen and feeling our enthusiasm and energy draining away. Perhaps we’re shifting paragraphs around, or fruitlessly debugging, or toggling back and forth between two designs without being able to decide which looks best. Eventually, we stand up and walk away. Invariably, the solution presents itself moments later, just as soon as we give ourselves a chance to really think.

A spoken interview will rarely produce responses as cogent as those in a written one. The nuance and artistry in a rehearsed musical piece won’t often be matched when sight-reading. We all know this. Yet we throw ourselves into these live situations in our work all the time, unprepared and exposed, hostages to chance inspiration. We’re even suspicious of those who seem to do too much planning and not enough doing.

The humble typewriter laughs at our self-limiting urgency. It reminds us that creativity isn’t the making, but rather the part that comes before: the thinking. The conception and the genesis and the synthesis. The diligence. The part that’s you, not the tool.

I won’t be submitting this article as a typescript, of course. I’ll duly retype it on a computer, send it via email, and sometime later you’ll read it on a touch-screen mobile device that hadn’t been dreamed of when my typewriter rolled off a production line in the now-nonexistent country of Yugoslavia.

I’ll open a new document in my trusty BBEdit, and stare at the blinking insertion point, knowing that the Undo command sits ever-ready in the Edit menu, and that the Backspace key on the keyboard applies some digital correction fluid automatically. I find it ever so slightly frightening. The terror of the blank page is doubled by having no mechanical barrier to expression. What to type, as the cursor sits there flashing, tapping its foot impatiently? I think that the worst possible writing machine would be one that transcribed your thoughts directly, without even requiring a keystroke.

The moment where I’ll have to open the lid of my MacBook will arrive soon, but it’s not quite here yet. For now, it’s just you and I, dear reader - and of course my typewriter, applying a drag force to every letter and punctuation mark. It’s an enforcer of austerity, in a way. You can’t use it without a certain rationing taking place. Economy of expression, and a quickly-acquired urge to really consider the entire paragraph before embarking upon it, becomes your primary concern. Maybe Strunk and White should have said “try writing it longhand, and you’ll see where we’re coming from”.

Am I suggesting you perch an antique next to your Magic Trackpad? No - not necessarily. But I think there’s a lesson here, whether your artistic output is words, code, pixels, music, movies or just about anything else.

We start too quickly. Indeed, we mistakenly believe that starting work means starting to produce. Our machines are too capable, and too eager for us to rush headlong into the blank page, knowing we can always double back.

Defer starting. Put it off. Do your thinking first, even if you have to tie a hand behind your back. Allow the idea to ripen, and lay out your work - just a bit of it, at least - in front of you to consider. Perhaps it’ll take longer, and perhaps you’ll end up with the same result - but I don’t think so. I think a period of meditation leads to greater rewards later. Fewer drafts or iterations, and a piece of work that’s more structured, elemental and true.

We have a choice. We can either do our thinking piecemeal, interspersed amongst flashes of inspiration and fumbling in equal measure, or we can re-learn some old wisdom. The teachings of this implacable piece of antiquated technology, replete with gears and levers; ink and steel. A throwback from a time before Undo.

Does my wife find the artillery-barrage of the typewriter as comforting as I find the sewing machine? Admittedly not. It’s an intrusive thing; loud and impossible to ignore. But that’s the point. It’s not easy, it’s not subtle, and it unapologetically stands on ceremony.

Words have a cost, it says, just in case we’d forgotten. Spend them wisely.

This article originally appeared in issue 16 of The Loop Magazine. I also have an article (on our unpreparedness for the decisions of adulthood) in issue 26, out now.

Since writing this piece, my typewriter of choice is now my beautiful 1959 Olivetti Lettera 22.