Looking back now, with the dubious wisdom of nearly twenty-five intervening years, Christmas Spirit isn’t a great title for a novella.

It’s pedestrian, for one, and only becomes more so when you consider that it’s a horror story set during the festive period. Taking that into account, the title becomes not just obvious, but almost self-conscious; it has the quality of the winking codenames used when distributing blockbuster film reels to cinemas.

I was at high school though, so let’s give me a break.

A year or two before, I got into Stephen King’s books in a big way. I read everything I could get my hands on — which was pretty much all of it from Carrie onwards, though admittedly not in order. I was captivated. The genre was almost incidental; what really struck me was the sense of being pulled into a world where fantastic things happened, but the setting was resolutely real. No more the fantasy and soft sci-fi of my earlier years: these stories could take place on the next road over, just down the hill a little bit, where the street lamps sometimes flicker as if something large whipped past unseen.

The characters were actual people — flawed and striving, grotesque and noble, doomed and destined — and I knew straight away that something had changed in me. This stuff mattered, somehow. I couldn’t quite articulate why. But it was important.

It took a while for me to consider actually writing something myself. I still vividly remember the several-weeks transition between Writing being an unknowable and nigh-magical thing, then gradually becoming an art that, maybe, some day, I might be able to practise. And yes, a few weeks is far too short a time for such a realisation. But again, I was on the cusp of adolescence. I’m sure you understand.

And I did start, eventually. Vignettes, and then the shortest of stories. Sometimes it was what we’d now call fan fiction, but mostly it was original material. Almost exclusively spooky stories, all in the psychological horror genre. Some protagonists were very similar to me (better stories, usually), and some were completely different (worse stories, for the most part). I was dipping my toes in, and there was a feeling of limitless potential. My name was still Matthew at that time — Matthew Ridley, indeed, for a number of years — and thus that was the name on each story’s title page.

I remember that Christmas Spirit was the first time I managed to scare myself. Real, delightful, sleep-with-the-lights-on fear; the kind that’s so much easier to find when you’re still a child. I felt a complex mix of emotions. I imagine it’s a little bit like what Peter Parker felt when he woke up the morning after he’d been bitten by the radioactive spider. I showed the story to my mother, and she made all the right noises, but you never really know what the truth is when the reader is a family member. There’s obligation involved. No-one else ever saw it.

I put it in a box — in hard copy; I printed it out as I wrote it — and sealed it away. It’s still there, and the box has accompanied me to several subsequent homes. Right now, it’s twenty feet away, through in my office. Just a teenager’s spooky story, which seemed like a beginning, but never came to anything.

I sat there in my room, night after night, typing when I should have been asleep. Scene after scene. Barely any notes. It never had an editing pass, because I was utterly immersed in the writing. There were nights when I was there as midnight rolled around, maybe even still in the school uniform I’d have to put on again a few hours later. My dreams were haunted by it — which happens in the story too, as the lonely man coming to terms with a bitter divorce slowly loses his mind, knowing that as the year’s end comes ever closer, something terribly wrong will be coming down the chimney one night — and then I sat on the train to school each morning in a daze.

I lived inside that story for weeks, and it felt like a doorway.

That’s what stories are, after all. You’ve just been watching me as a boy, typing in a dimly-lit room decades ago, and sitting on a train staring out at the scenery but not really seeing it, and sleeping restlessly then waking abruptly from self-induced nightmares. You saw it because, right now, Matthew Ridley is the story I’m telling you. That’s all life is, when you get right down to it. Our tales; some true, and some truer.

I imagined having a book out, with my name on the cover. I pored over the paperbacks I owned, and the idea was distant and fanciful, but compelling. My various Stephen King novels were mostly of a single edition, where the author’s name was rendered with the forename in widely-spaced, lowercase italics (s t e p h e n), and the surname in contrastingly slender and elongated capitals below (KING). It was striking. To this day, it’s evocative to me. And of course I imagined how my own name would look there, in the same style. I picked up a blue biro and doodled on a scrap of paper. Art was never my thing, but the resulting sketch felt like an omen.

I put it away, too, tucked amongst notes and fragments; the work of an idle minute. I set down the pen and went about my life, time accelerating each day, and when I looked up again, more than twenty years had passed.

There were two things, though, hidden away but somehow surviving. Miraculously alive, despite years without light. There was the need to write — and it is a need — and there was the box. I think we all have at least one such box, figurative or otherwise, and our doom is that we must eventually reopen it. I did.

Matthew, if only you could hear me, now there is a book. It’s the first of what I hope will be many, though I’m as blind to tomorrow as you are to so many of my own vanished yesterdays. There’s the intention of more, at least, but there’s also one here already. Please don’t ask how long you’ll have to wait for it — being thirty-seven years old must sound so impossibly ancient to you — but instead let’s take a moment to just consider that it was finally done.

As for the future, well… I don’t know. Is there a third me here too, now telling the story of the writing of these words? Is he looking back with a smile on his face, or with bitter tears in his eyes? Am I worried about that?

Oh, you bet I am. Terrified. Time whips past unseen, fast enough to make the street lamps flicker. But what can I do?

Sit there and write for a while longer, Matthew; the hour isn’t so terribly late yet. Write, and live inside the story, where you’re afraid but actually safe. Hold onto it for as long as you can, because there are dark things coming. So dark that, looking back, I still can’t see through them. But they’ll pass.

Life is a tale, you see. That’s the best wisdom I can give, if only you could hear. 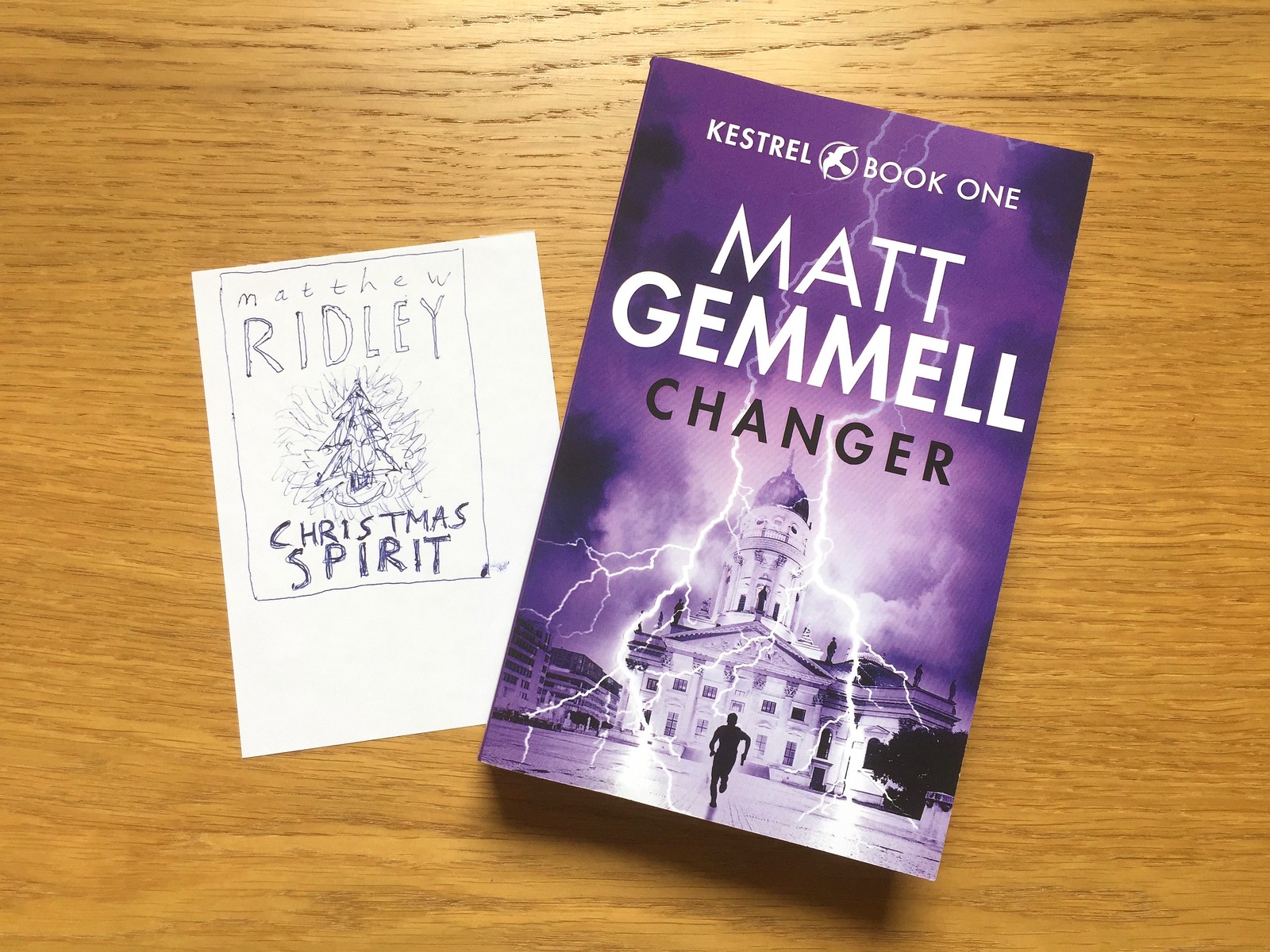 CHANGER is out now, in paperback - including an autographed edition - and on all major e-book stores.