A month or two ago, I took delivery of something I’ve periodically had my eye on for several years now: a big, chunky mechanical keyboard. It’s the more modern and practical equivalent of a typewriter, and is absolutely an object of desire for writers (or programmers) of a certain vintage — so I had to have it. 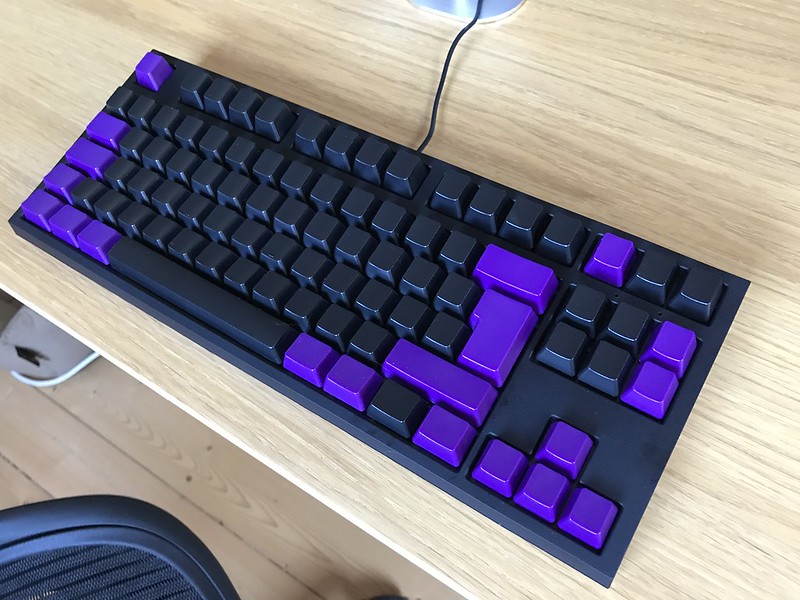 So what’s a mechanical keyboard? Aren’t virtually all keyboards mechanical? Certainly, but the term has a specific meaning: most contemporary computer keyboards, on desktop machines as well as laptops, are of the shallow, quiet variety. They have very little travel (the vertical distance the key moves when you press it down), don’t make much noise, and tend to be constructed as flat keys on a lever mechanism, which depress a dome switch on an underlying sandwich of electronics. They’re very thin and light, and are very attractive for those reasons. If you’ve got almost any modern laptop, or any Apple non-iOS device at all, you’ve got one of these dome switch keyboards — not a mechanical one.

Mechanical keyboards, on the other hand, are beasts. There’s a physical switch under each keycap, and the keycaps themselves have loads of travel: several times that of dome switches. They’re percussive, positive in feedback, and are often very, very loud in comparison. If you’re hearing a CHOK CHOK CHOK, or a CLACK CLACK CLACK, it’s a mechanical keyboard… and you probably hate that particular colleague even though their keyboard sounds amazing.

As with any now-specialist interest, you can go as deep down the rabbit hole as you like. There are many different types of switches to choose from, each of which sounds and feels different. The most common type are those from the Cherry MX range, and the standard is to use colours to distinguish each one; if you pull a keycap off a mechanical keyboard, which you can pretty much always do without causing any damage, you’ll see that the central mechanism is physically painted in the corresponding colour.

Reds are linear, like pressing a spring smoothly down, and almost silent. Browns are very quiet too, but have a distinctive tactile ‘bump’ at their activation point, which is before you reach full travel. Blues have both a bump and a CLICK that echoes around the room. Blacks are stiffer versions of reds, greens are stiffer versions of blues, and so on and so on. Gamers love reds, and writers love blues or browns.

This particular writer loves blues. Here’s a video of my typing machine, and the gorgeous bloody racket it makes. Those are Cherry MX blues, and they’re actually slightly dampened with 0.2mm O-rings, if you can believe it, because my office is all hard wooden surfaces and very acoustically bright.

Fair enough, you say… but why? Well, I’ll be the first to admit that it’s an indulgent thing; a borderline eccentric acquisition. But dear reader, it’s the most delightful keyboard I’ve ever typed on.

Here in Scotland, we use profanity constantly — as an intensifier, or endearment, or insult, or almost anything else. When we want to say that something is substantial, and bold, and utterly (gloriously) without shame or self-consciousness, we have a certain phrase… and it’s absolutely the right one to use here:

This is a big effing keyboard.

It’s not any tougher on the fingers or wrists, though, despite what you might expect; indeed, the blue switches activate at an intermediate point on the key’s travel just like the browns, so you don’t need to press them fully down as with dome switches (which is called bottoming out). I actually find the mechanical switches gentler on my hands. And regardless of how it may appear, the key spacing isn’t noticeably greater than on a Apple Magic Keyboard either.

So, no loss – except for portability and in my case a Bluetooth connection — but a huge emotional gain. Typing on this thing feels like writing. It feels like bashing out a story then yelling for the copy boy. It feels like anachronistic and hard-boiled tale-telling. It feels like Pulitzer journalism. It’s like a telegraph key, and an old movie, and Woodward and Bernstein. But it’s also mainframes and the IBM Model M, and the BASIC programming of my youth. Big keys that take a beating, and a keyboard that could deliver one if swung at a foolhardy burglar.

It’s pretentious and extravagant and intrusive, and those are all plus points for me. While a svelte Apple keyboard crouches stealthily on the desk’s surface, doing its best to vanish into the background of its own glittering technological utopia, there’s something cold about it; something ascetic and even vaguelly sinister. It looks like it could receive a prearranged remote signal and then suddenly transform into an aluminium and white plastic robot, taking flight to pursue its fleshy quarry with uncanny manoeuvrability and relentlessness.

By contrast, I’d only have to climb a small flight of stairs to evade my mechanical keyboard’s hypothetical homicidal rampage — not that I can imagine the least bit of enmity from something so resoundingly cheerful.

ROGER THAT, it says, in response to every keypress. GOT IT. KEEP ‘EM COMING.

I do have a typewriter, by the way: a gorgeous old Olivetti Lettera 22, made in Glasgow in the late 1950s. It’s big and heavy and rock solid; a thing of levers and cogs and inky ribbons. In use, it sounds like a librarian’s nightmare (or secret fantasy), and it has far, far more in common with a mechanical keyboard than with more 21st-Century typing devices. They’re both thunderous, and precisely engineered yet somehow gleefully unrefined, and they could each quite readily put a hole in the wall and then immediately be used to type an article entitled Why I Just Put a Hole in the Wall.

They’re pompous and tactile, but more importantly they’re intentional machines. They make a celebration, and a sensory experience, out of the thing that they’re designed to do. Modern keyboards try their best to let you type with as little sound or movement as possible; they reduce the experience almost to the non-physical. Virtual keyboards on touch-screen devices actually achieve that dubious goal, and occupy an uncanny valley of uncertainty and precariousness because of it. Typing isn’t a stationary action, and nor should it be. It’s not a silent activity. And writing certainly isn’t either of those things.

You can type using whatever you want, but isn’t there something minimising about the snick snick snick or the tak tak tak of modern keyboards? A certain leeching-away of colour, and feeling, and momentum? And, far worse, isn’t it almost soul-destroying to deliver the Return key’s coup de grâce of conclusion, but only being rewarded with something that sounds like… plik?

I’ll take my CHOK CHOK CHOK or my CLACK CLACK CLACK any day. Writing feels like doing something in the world, instead of just flicking slender characters into an electronic void. I wouldn’t give up the miracle of my iPad for almost anything, but please don’t also take away the artillery-barrage of the way we used to compose.

When I’m working on a fast-paced scene, I want the orchestra keeping up with me. When I hit Backspace, I want it to be punitive. And when I finish a paragraph, I want a one-gun salute for my efforts.

It does make a hell of a racket; no question about it. My wife has walked around to my side of the desk a couple of times to check I’m actually working, rather than hammering gibberish into a document in some kind of pantomime of productivity. When I speak to her via FaceTime while I’m writing, she winces and turns down the volume on her AirPods. I understand each of those reactions perfectly. I sympathise.

We’re an Apple household, both in product-purchasing choices and aesthetic preference. I do embrace minimalism whenever I can. My desk is an expanse of wood-veneered emptiness — as beautiful for me to post on Instagram as it is annoying for my followers to view — but not entirely so. One object is completely out of place.

Not the iPad Pro on its equally sleek aluminium stand. Not the mere millimetres-thick drinks coaster in brown leather. Not the faux pot plant in contemplative isolation in the rear-left corner. The other thing.

The thing you can hear from down the hall, even with the door closed. The thing that says WRITER AT WORK, and ROGER THAT, and KEEP ‘EM COMING. The thing that Apple will never again make or sell, because it would be just as out of place in their product photos as it is in my otherwise-zen home office.

I love the iPad, but it’s a love borne of respect and awe and admiration. An intellectual love. If you were to ask me what my favourite gadget is… well, I’d answer straight away.