A few years ago, I had a health scare. It was my heart. I was terrified, but I wasn’t surprised.

I’ve always had an irrational fear of developing heart problems (I have no particular family history of it, and I hadn’t had any worrying symptoms before). It’s probably because I’m not great with needles or blood, and the heart is blood central. Nothing more complicated than that. Silly, and eminently manageable - until that day.

Despite the event being objectively surprising, then, my main thought (through the haze of fear) was “Well, this is it - at last”.

I shook. I’m not sure whether it was adrenalin, fear, or the fact that ambulances are cold at 3 AM on an Autumn morning. Probably a combination. I remember the next few hours more as images than narrative.

Night, sirens, hospital. Needles, blood, and the deeply unsettling beeping of a cardiograph. Nurses and doctors, tests, waiting, and (eventually) the light of a new day that might as well have been a new century.

A quiet and surreal taxi ride home, through an exaggeratedly normal Thursday morning in the city. People going about their business like a street scene in a musical; whistling, and studiously avoiding looking at the camera.

The ride took seconds and hours, and then it was abruptly over. Pay the fare, step out of the taxi, and… that’s it. Resume routine, until told otherwise. I had a sense that I must have misplaced an instruction booklet (perhaps from the government) detailing how to proceed in such situations.

The junction between mortality and mundanity is an exquisite source of perspective. I sat down on the pavement. I laughed, and then I cried, and then I realised that the boundary between the two is treacherous and illusory. Then I walked up some stairs, unlocked my front door - drab on other days; resplendent on this one - and went inside. I’d recommend the experience to anybody.

(Twenty-seven hours later, we picked up the keys for our new home. You couldn’t write the schedule of real life as fiction, because it just wouldn’t be believable.)

I spent most of that long post-emergency-department day on the couch. At length, I wandered through to my office, pulled my block of sticky notes across the desk towards me, and picked up my favourite pen - the one my wife bought for me. The familiar instrument suddenly seemed unbearably, agonisingly poignant, and a few more tears quietly fell. I would later realise that, in that moment, the pen had become a totem for my fear of being taken from her.

I wrote one word: Legacy.

As a tool of years of self-torture, that single word eclipses even my mostly-imagined terror of cardiac arrest. I curse it weekly. It’s my master.

I’ve come to see my impromptu trip to hospital as a message, or perhaps a reminder. An unsubtle and artless nudge. A memento mori, as if I needed one.

I’m haunted by thoughts of what I’ll leave behind, and I don’t mean in the biological sense of offspring: after all, anyone can do that. Nor do I mean the fond remembrances of family members, which have a limited radius and fade quickly once a generation passes.

What troubles me is a compulsion to contribute something enduring, that can speak of me when I’m not there. It’s difficult to do that in my line of work (making software). We create software that will live only for so long, and whilst it indicates our design priorities and our insight into what other people need or want, we tend to see software as an entity unto itself. Few people look at an app and see its creator. As a representation of the self, software is usually very opaque.

I’ve tried releasing source code, of course. I think you can tell a lot about how a developer views their work, community and career by how much code they’ve released (assuming no artificial constraint exists to prevent them doing so). I was very nervous before I released my first piece of open source Cocoa code, years ago.

I don’t remember what the code was, but I vividly remember the inner debate. The issue of competition didn’t enter my mind, but fear of ridicule certainly did. Was I good enough? Did this reflect well on me, or poorly?

But you can leave this behind, my mind whispered. And so I released the code, and plenty more since.

Code, at its best, can give you a little more of a sense of the author - there’s certainly art in it. It’s the art of a cold and analytical world, but there’s room for personality and creativity there. It might even make others think of the author just a shade more than a software product itself.

Code rots just as apps do, though. It gets out of date. Platforms and APIs move on. Entire languages fall out of favour and become historical curiosities. Infectious licenses aren’t so much a solution as they are an unhelpful denial of reality. There’s no immortality for me to find in code, either.

So I began public speaking. My fear of it had long since vanished, years before I spoke at my first conference in my current capacity as a Mac/iOS developer. I’d already spoken in front of rooms full of people in many different countries, before OS X was ever released.

Public speaking is better at temporarily quieting that nagging voice in my mind, because people naturally entwine the message with the speaker. It’s personal, and it’s an opportunity to reach people on a visceral level, albeit for a very brief time. At its best, a good talk can create some ripples of change in how the audience thinks about something.

Still, you’re only up there for perhaps an hour, or even less. A year from now, few will remember the specifics of what you said. After a further year, they probably won’t even remember that you spoke. Speaking certainly fits the bill for exposure, but its half-life is sobering. For me, it’s not enough.

And so I write, and have the audacity to self-publish online.

I haven’t worked out the details of how to make these pieces permanent, but the very structure of the internet reassures me that at least some of them will survive in some form. It’ll take hundreds of years for my words to become incompatible with their audience, and I can edit at my leisure. You can read them whenever you want; I will always be on stage, even when I’m only a memory.

Everything I’ve mentioned - apps, open-source code, public speaking, and writing - has an element of ego. I’ve probably even listed them in increasing order of egocentricity. Those who don’t like a particular piece will usually fasten upon the undercurrent of chutzpah which marks the whole endeavour, rather than the argument itself. I don’t deny that it’s a factor.

But it’s not about ego, even if ego is involved. That’s what you wouldn’t guess from my online persona, and I take pains to keep it that way. I’m actually trying to quell a low-grade panic that’s always in the background. A voice that won’t be quiet. I actively worry about it.

I don’t have a particular problem with the biological inevitability of personal oblivion. Someday, some hour, some moment I will cease to be. An instant of black, and then non-essence. No afterlife with ancestors, and no higher plane of consciousness. I don’t believe in those things. I believe in my internal universe just silently blinking out of existence, and me along with it. It’s natural, and I think I can accept it - intellectually.

But I’ll lie awake worrying about being forgotten. I’ve had conversations about it over the years, and I’ve learned that it’s not generally a motivator in people’s lives. I’m the unusual one. Maybe it was some trauma of the past. Maybe I should talk to somebody about it. He was such an introspective child.

I’m not searching for personal glory, but rather a marker that can endure more Winters than I will. Some connection - empathy, ideally - from a future consciousness back to the one that’s typing this sentence.

How morbid, some have said. You’re too young to be thinking that way. Dum vivimus, vivamus!1

It isn’t that simple.

I couldn’t write a purely ‘professional’ blog that just chatters about what’s going on in my business, or reacts to the latest minutiae of our endless parade of electronic toys. Aside from it being done a thousand times over, everywhere on the web, that kind of writing just wouldn’t let me sleep. It’s not enough. Without character, the author becomes interchangeable, and thus forgettable.

That’s why I’m willing (and compelled) to put myself out here on display. An eponymous collection of words, with articles that sometimes touch on very personal things. I’ve spoken about technical topics, of course, but also about writing, and divorce, and depression. Religion and politics. Prejudice and discrimination. The truth of me. Things written by an actual person, while I’m still here.

Equally and consequently, the other authors whose work I most enjoy reading tend to talk about not only professional but also personal topics. I may not share your specific love of guitars or coffee machines or pencils or hiking boots. I may have no comparable personal experiences with which to truly understand the tragedies and triumphs of your life. But you’re more real to me because of them. Not just a masthead or an avatar, but a human being that has actual shape and colour in my memory.

I truly hope that the same is true for me. It’s the reason that I write. The type of feedback that means most to me, by far, is simply this: your words moved me, and I’ll remember them.

Yesterday was my birthday; I’m 34 now. Every year, no matter where we both are, my mother calls me at the exact minute of my birth (21:22). In the background, I can always faintly hear a clock ticking. I’m never entirely convinced that it’s just the grandfather clock in the hallway. Time marches on.

I’m fine, by the way - as far as I know. Indeed, I’m quite happy not knowing. If I follow the family pattern (on both sides) and avoid accidents, I might still be vexing people half a century from now. It’s taken me a while, but I do now believe it’s at least possible.

I hope that legacy won’t still haunt me then, because by that point it’ll be too late. My own fear of passing entirely from memory has been a companion for many years, but I’m sure I could adapt to its absence. And of course, it’s that very fear that I’m really talking to right now.

I wrote this for you, demon. Rumpelstiltskin. My trusty cathexis. I still see your shadow, as clear as ever.

But perhaps if I keep writing - if I keep trying to connect and to resonate - then one day, you might begin to fade. 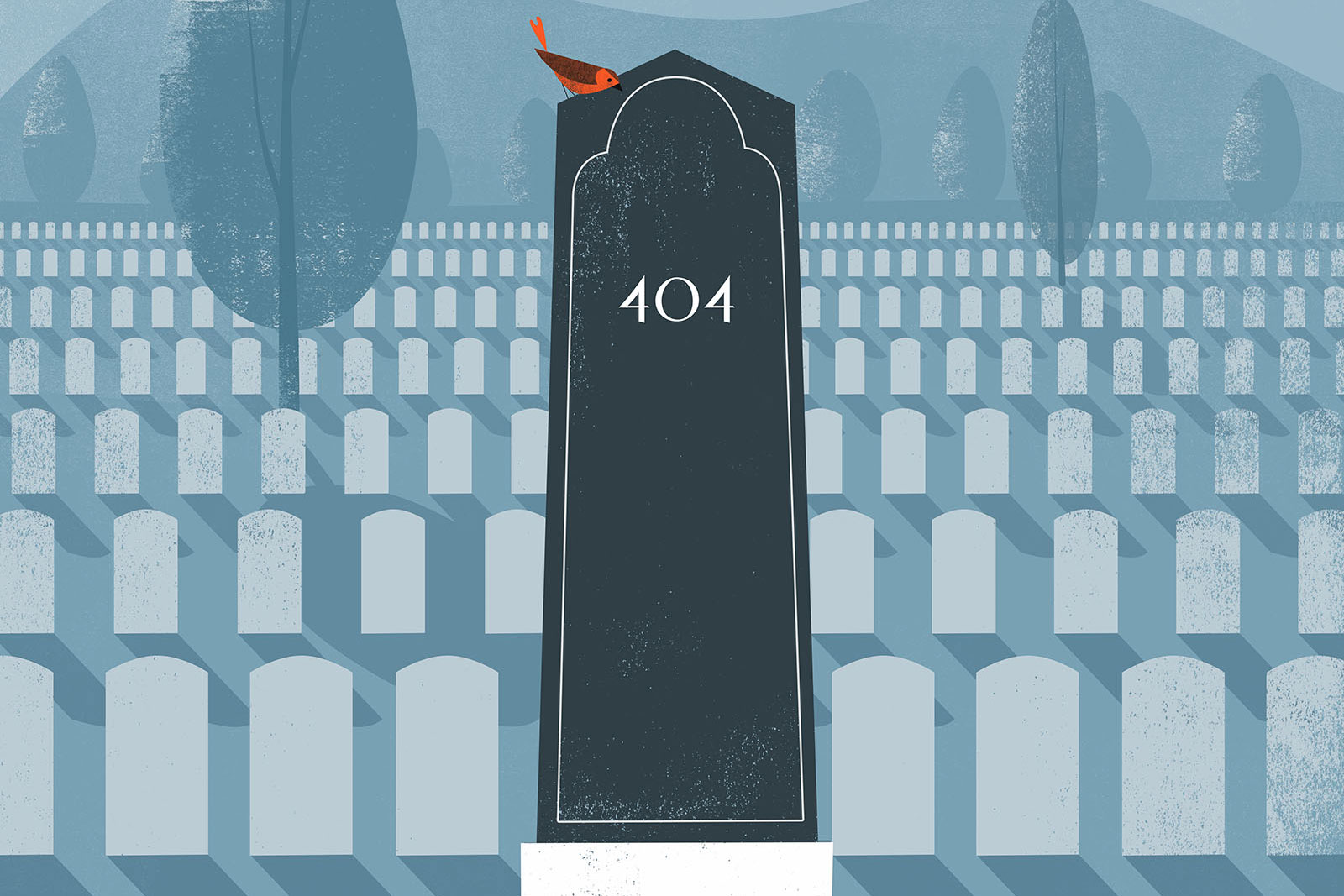 This piece appeared (with the above wonderful illustration by Tom Froese) in issue 8 of Offscreen Magazine. It’s also part of my essay collection, Raw Materials.